Some Brooklyn Street Art For Ya! 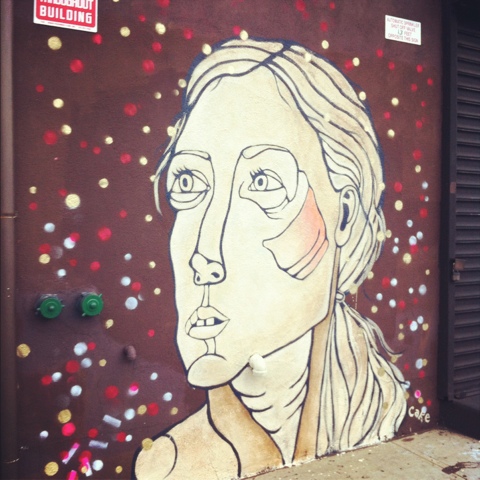 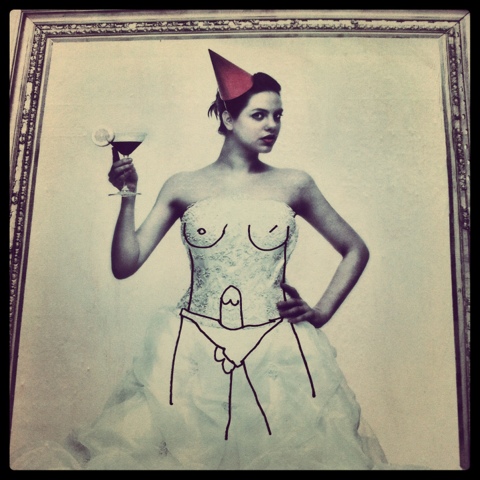 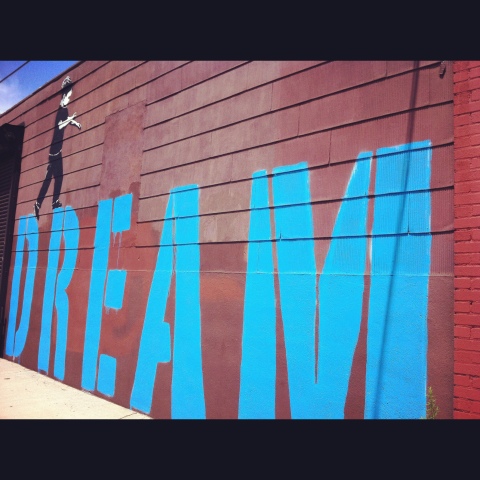 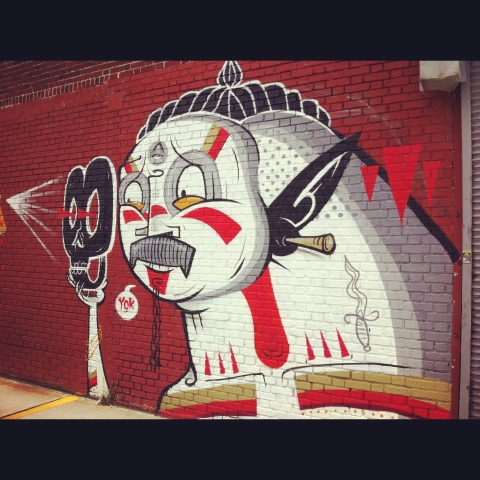 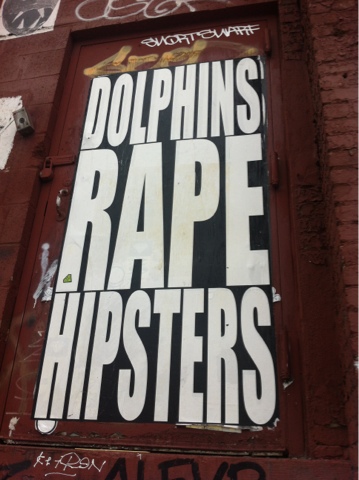 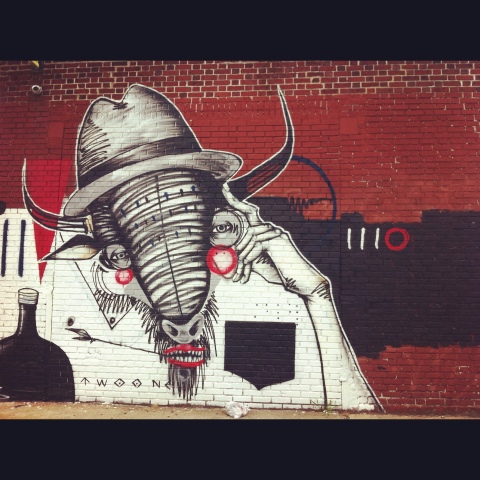 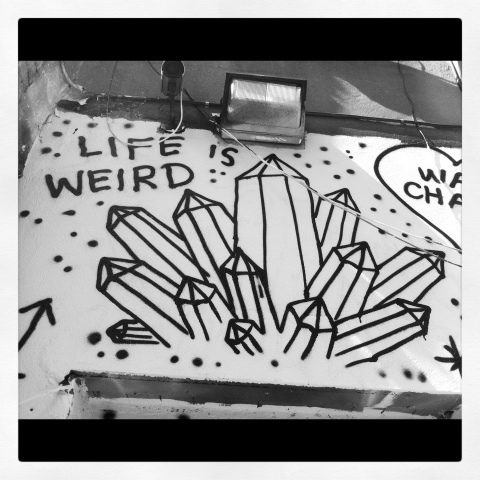 Its like I've been HEARD! After my rant about subway etiquette with people giving pregnant women their seat, something amazing happened...

After work last night I met Scott at the F train and we commuted home together. I walked onto the subway and per usual, no one noticed or bothered to get up and give me a seat. (Again, I don't seek out a seat, but, it is funny that people ignore). A man walks onto the train and immediately sees me and starts talking VERY loudly about how this pregnant woman (me) needs a SEAT! He's looking around at everyone and is yelling that people need to respect and get up and that is how he was taught in Brooklyn!! I immediately turned red and a young girl felt badly that she offered me her seat. The man said, "no, you can sit, but you should notice these things. (she claimed she was very much into her book) I'm talking about the man sitting next to you". The man did eventually get up and offer me his seat... not because he wanted to, but because the guy was literally going to keep yelling if he didn't. I sat down to avoid more drama. I looked at my "subway angel" and said "thank you". He looked back at me and then to Scott and smiled and shook his head like, people should know. It was so so so sweet. This man also was walking with a cane because of a bad foot. I wish I could ride all trains with him.

that's the thing with NYC... you never know what is going to happen and who is going to help  you out. Lots of Love.
Posted by Care at 11:19 AM 3 comments:

A public pool opened up in our neighborhood in June and its free for all that want to come to swim. HOWEVER, you have to wait in massive lines, can't have your cell phone, have to deal with an absurd amount of teens and fear for your life or safety.

OK, I am exaggerating about the life part, but the safety is definitely an on going issue over there. There have been countless fights, police are called in daily and yesterday pepper spray was used to calm crowds that were trying to break in.  I don't really care about the pool at all, to be honest with you. Scott and I do not go and it doesn't affect us in the least bit. BUT, it makes me think about our unborn daughter. I grew up in a quiet suburban area outside of DC. I did go to public school and deal with the normal'ness of burb high school so I wasn't completely sheltered, but, Fairfax county is a far cry from Brooklyn. My husband grew up in a very nice suburb out side of San Francisco and went to private Catholic School. Point is, neither one of us has had an urban childhood. Our little bundle of pink joy absolutely will and there are times where I am jealous of all that she will have at her finger tips, taste buds and eardrums but there are also times when I worry about how she will turn out. Will she be cynical like most New Yorkers? Will she have a slight Northern accent because her school friends do? Will she join a gang? What do elementary school gang members like to eat after school? I'll check Amazon to see if they have any recipe books for after school snacks for our little gangsta baby. Truth is, we live in a hipster-ville, not at all a gang infested neighborhood, but, I do worry about her since I truly cannot relate to the upbringing she will have. How old does she need to be before its OK to let her ride the subway alone? How old does she need to be before I feel comfortable with her walking home from a friends house or sending her to get something from the market down the block? I know these seem like silly questions, but, they are very real too. Its just something funny to think about, I guess. I'll tell you one thing, this little girl will be very exposed to many amazing things living in this crazy city. Born in Manhattan, raised in Brooklyn ... (conceived in Philly). HOLLA!

But, back to the pool. If she wants to go to the public pool with all the other crazies in Brooklyn, I'll make her Dad take her.

Here's a pic of the pool: 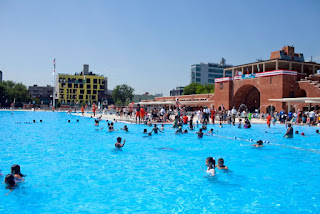 Here's a pic of me and my sister on my rooftop. 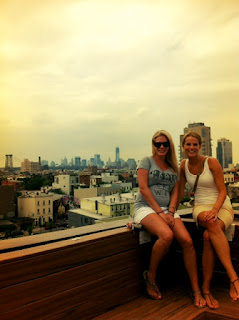 now that all my cheerful salutations are done and over with I'd like to do a quick rant for just a moment.

What is my rant about? Manners.

What about manners? People should have them.

I have been doing a little study about my subway rides since I was 21 weeks pregnant. I started at 21 weeks because I was fully showing and I didn't look like I just ate a massive burrito anymore. I am and look unmistakably pregnant.

I ride the subway for approximately 1 hour a day commuting to work. I switch trains a total of 4 times which means I get on a new train with new people 4 times a day. Do you want to know how many times I've had someone get up and offer their seat to me in the last 100 weekdays of riding the subway??? 8 times total.

Now, not only is that sad... that's just terribly rude. Especially when I know you see my stomach almost hitting you in the face as you sit there trying to ignore me.

Now, I don't EXPECT people to get up for me, but, people should offer just to be kind. Carrying a big stomach around in general is tough in this city, put a pregnant woman on a jolting subway while standing and in severe heat is borderline torture.

there are some lovely people out there that do get up though and to them, I THANK YOU!

Out of the 8 times I have been offered a seat its been from a male age 25-35 minority. They get up within moments of seeing me, or another pregnant woman and insist on having their seat. Thank YOU!!!! Your mothers have taught you well, or you have a heart and notice.

I have only once been given my seat from a white male and have never been given a seat from a young white female. To the young white females out there that are ignoring the pregnant women out there, you'll learn sometime what its like and perhaps karma will punish you. But, I hope not because being jostled on a subway while pregnant shouldn't be wished on anyone... when there is a seat to be had.

To take part in the poll directly to the right about pregnancy... its truly appreciated! :)
Posted by Care at 12:54 PM No comments:

Weekend of the 4th!

Hello!
Sorry its been a bit since my last post but we've been on a little vacation to Florida for a week of sun and fun. It was so nice to leave NYC and breathe some fresh air and see the stars and feel the blue/green warm water. I literally have been trying to make my mind return there while bumping into people on the subway the last three mornings. :) We had a great visiting family, having a little birthday party for my pops and eating lots of great seafood and BBQ. Perfect summer get a way with my love and great quality time with my family. Now... on to PICS!
Posted by Care at 3:33 PM No comments:

Hello.
We're a married couple living in the south by way of LA, DC, Philly and Brooklyn. We're just living our life together one memory, adventure and smile at a time.

And we have a ridiculous frenchie named Mac